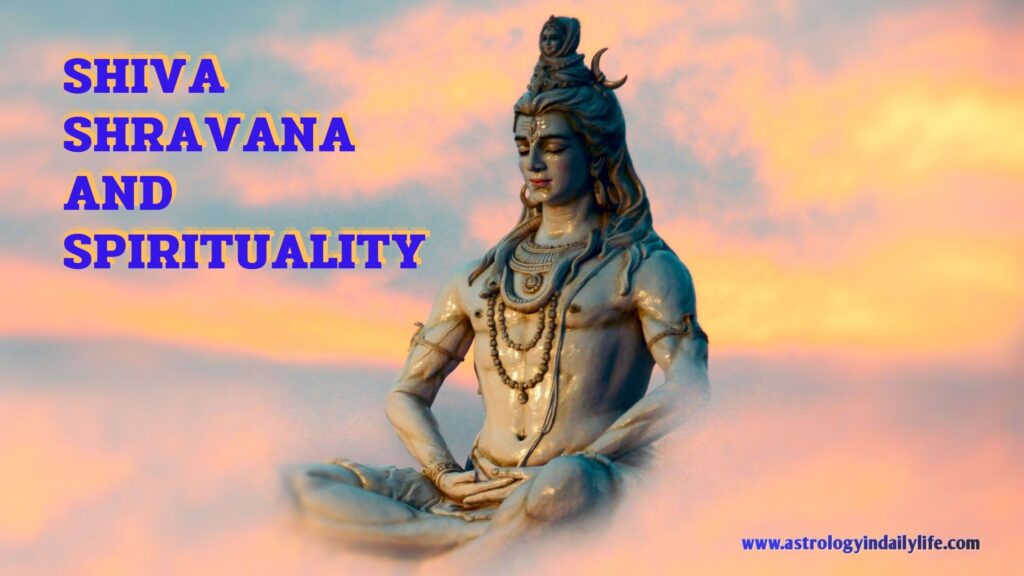 Shravana Maas is the fourth month of the Hindu calendar. It is the fifth month of the solar year and the first of the Chaturmas (the Four Holy Months). These four months of Chaturmas are traditionally reserved for devotion, penance and meditation. The month of Shravana is very important for the entire sub-continent of India as it signals the arrival of the South-West monsoons.  Shravana month is almost synonymous with fasting and prayers.  Praying to Lord Shiva in the Shravan Maas is 108 times more powerful than praying at any other time of the year.

Let us understand the significance of Shravana Maas and its connection with Shiva & Spirituality:

Q:        What is the astrological significance of Shravana Maas?

A:        Shravana month takes its name from the Shravana Nakshatra (Alpha Aquileia constellation also known as the Eagle Star).  ‘Shravana’ in Sanskrit means ‘hearing’. This is the month when one should speak less and hear more; the concentration should be on being a focused listener. Listening is also associated with gaining knowledge. Shravana Nakshatra is also called the ‘Learning Star’. No wonder Shravana Maas starts a day after Guru Purnima! As per Vedic astrology, persons born in Shravana nakshatra gain name and fame in the world.

The cluster of three stars of the Shravana Nakshatra represents the three steps taken by Vamana Avatar to conquer the three worlds, in the process humbling the ahamkara (ego) of the great king Bali.

Shravana month begins when Sun moves to the sign Leo.  Interestingly, all the four parts of Shravana nakshatra fall in the sign of Makara (Capricorn) ruled by Saturn; while its lord is the Moon.

Q:        Why is Rudrabhishek so important in the month of Shravana?

A:       As per mythology. the Samudra Manthan (Churning of Nectar) took place in the month of Shravana. In the course of churning the Kshirasāgara (the ocean of milk) for Amrita (Nectar), fourteen divine gifts emerged. These included Lakshmi (the Goddess of Wealth), Kaustabha gem, Parijaat (a Divine ever-flowering tree), Kamadhenu (the Wish-fulfilling Divine Cow), Kalpavriksha (Wish-fulfilling Tree), Airavata (Indra’s Elephant), Shankha (Vishnu’s Conch), etc. The fourteenth gift was Halahal – poison.

While the first 13 gifts were divided between the Asuras and the Devtas, no one was ready to take the Halahal. Shiva chose to consume the poison. He held the Halahal in His throat. This caused a burning sensation. Hence all the Devtas started offering Ganga water to Shiv to soothe the fiery impact of the poison. This continued as a symbolic tradition in the form of pouring water or milk on the Shivling. This is also known as Jal Abhishek or Rudrabhishek.

Q:        Why is the Shravana Maas considered so auspicious?

Just as all Mondays of Shravana month are Shravana Somvars, so also all the Tuesdays of this month are Mangala Gauri Vrats – the married ladies fast and pray for the long life of their husbands while the unmarried ones pray for a boon of a good and worthy husband.

Q:        Why do Kaavadis carry Ganga water in the month of Shravana?

A:        A special sect of Shiv devotees known as Kaavadis undertake a sort of a pilgrimage known as Kaanvad Yatra – carrying the holy Ganga water in urns or large pots from the river Ganga to the nearby Shiv Temples. Thousands of saffron-clad Kaavadis carry water from the Ganga in Haridwar, Gangotri or Gaumukh, the glacier from where the Ganga originates and other holy places, like Sultanganj in Bihar, and carry it to their hometowns, where they perform Abhishek (pouring of water) of the Shiva lings at the local Shiva temples, as a symbol of gratitude and devotion. This tradition originated in the Treta Yuga (the Silver Age of the Hindu Mythology) when Lord Rama carried the holy water of river Ganga in a Kaanvad (urn) to offer it to Lord Shiva at Baba Baidyanath Dham which today is in the Deoghar district of Jharkhand.

Q:        Why are there two different dates marking the beginning of Shravana in India?

A:        A month in the Indian calendar consists of two fortnights – from Poornima (Full Moon) to Amavasya (New Moon) and back. Now, the North Indians follow the Purnimant Calendar; that is their month begins with Poornima or the Full Moon as their calendar always begins with the Shukla Paksha. On the other hand, people in Maharashtra and South India follow the Amavasyant calendar. Their month begins from Amavasya or the New Moon since their calendar begins with Krishna Paksha. Hence there is a difference of a fortnight between the dates of the beginning of Shravana Month in North and South of India.

Q:        Which articles can one use for performing Abhishek of Lord Shiv or Rudrabhishek?

A:        One can use any of the following 11 items to perform the ritual of Abhishek of Lord Shiv or Rudrabhishek: milk, curd, ghee, honey, sugar/jaggery, Bael leaves/grass, coconut water, Barley water or Ganga Jal.

MANTRAS FOR RECITATION DURING SHRAVANA: