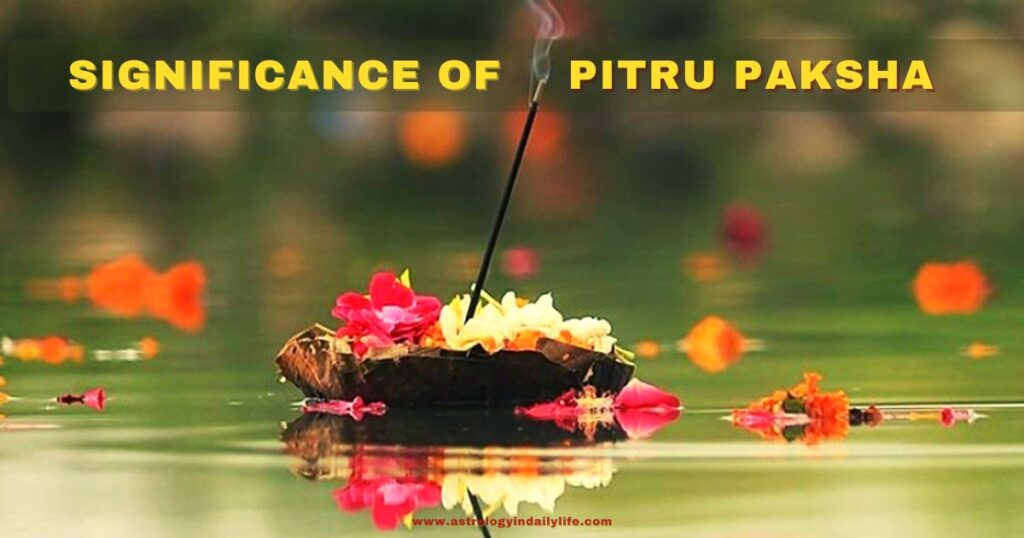 Pitru Paksha literally means ‘the fortnight for the Ancestors‘. Almost every culture in the world honours its dead ancestors. For instance, the Japanese Buddhists observe Bon-Odori where families come together to welcome their ancestral spirits. Mexicans observe Dia de los Muertos or the Day of the Dead. Furthermore, Halloween, or All Hallow’s Eve, is a celebration specifically for remembering the dead, the saints, martyrs, and all other faithfully departed. In fact, in Chinese culture, there is an entire month called ‘ghost month’ which is dedicated specifically to honouring their ancestors.

Likewise, in India, too, Hindus have a period of paying homage to their departed ancestors. This period of 16 days is called Pitru Paksha – ‘Pitru’ means Ancestors and ‘Paksha’ means a fortnight. Thus, the sixteen days of the Hindu month of Bhadrapada is Pitru Paksha. This Paksha begins on Purnima – Full Moon Day and ends on Amavasya – No Moon Day. The last day – “Sarva Pitri Amavasya’ or the ‘Mahalaya Amavasya’ – is a day for honouring all the ancestors.

Pitru Paksha is not a time for celebrations. It is, in fact, a fervent period earmarked for remembering the departed ancestors and performing special rites for the salvation of their souls. Hindus believe that during the Pitru Paksha, their deceased ancestors leave their abode, Pitru Lok (Land of the Dead) and descend on Prithvi Lok viz the Earth.

STORY BEHIND OBSERVANCE OF PITRU PAKSHA

In Mahabharata, when the legendary Karna reached heaven after death, he was offered food made of solid gold. In his lifetime, he was famous as ‘Daanveer’ due to his bigheartedness and generous nature. He complained to Lord Indra that he was very hungry and obviously, cannot eat gold. Indra smiled and reminded him that though he offered a lot of gold in charity when alive, he never offered any food to his ancestors or perform the Shraddha ceremony. Karna realized his mistake. He requested that Lord Indra give him one chance to return to Earth and correct his mistake. Thereby, Lord Indra granted him his wish. Karna returned to Earth and fed the poor for 16 days. This was the period of Pitru Paksha.

There are three main rituals of Pitru Paksha – Tarpan, Shraadh and Pind Daan.

IMPORTANCE OF CROWS IN PITRU PAKSHA

Hindus believe that crows are messengers of Yama, the God of Death. Any food fed to the crows directly satiates the ancestors’ spirit.   According to the Puranas, the crows had tasted the nectar, Amrit – which made them immortal. Even today, it is widely believed that no crow dies its natural death. It dies only sudden death due to an attack or accident. Incidentally, both crows and Peepal (Sacred Fig) tree represent the Pitrus – the dead ancestors. Hence, feeding crows and watering the Peepal tree are important rituals of Pitru Paksha. Besides the crows, there is also a custom of feeding cows, dogs, ants and beggars during Pitru Paksha.

To read about REMEDIES FOR PITRU DOSHA IN A HOROSCOPE, click HERE