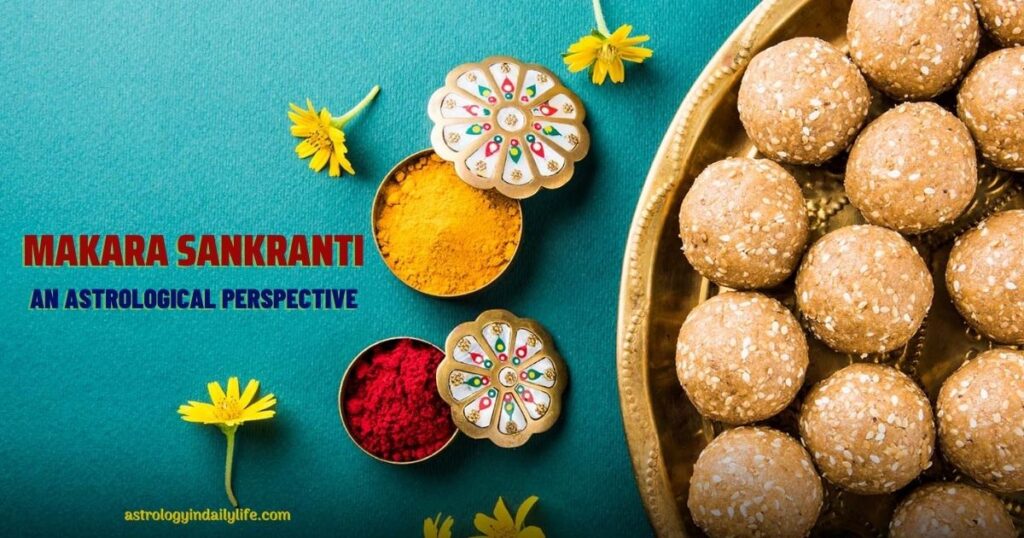 Makara Sankranti is an important astrological and astronomical event in the Hindu calendar. The word ‘Makara’ means ‘Capricorn’ and ‘Sankranti’ means shifting (Sankramana) of the Sun from one zodiac sign to the next. It marks the end of the winter solstice and indicates the transition of the sun from the celestial sign of Dhanu (Sagittarius) to Makara (Capricorn) on its cosmic path. This is the day of the longest night and the shortest day.

Makara Sankranti, being an event related to the movement of the Sun, is one of the few Indian festivals which falls on the same date nearly every year, viz. 14 (sometimes 15) January. This usually coincides with the first or second ‘tithi’ (date) of Krishna Paksha (Waning Moon) of the Hindu month of Magha. Hence, people take a holy dip in rivers on this occasion – also called ‘Magha Snana’.

Makara Sankranti also marks the beginning of the auspicious period of ‘Uttarayana’ (also called the ‘day of the Gods’) – thereby indicating the beginning of a six month period of prosperity and good fortune. This event strikingly corresponds to the 6 months day at the North Pole after the winter solstice. The Sun starts moving northwards now – from Tropic of Capricorn towards Tropic of Cancer – and days start becoming longer and warmer. Makara Sankranti also marks the beginning of the Kumbha Mela and the end of the Sabarimala pilgrimage.

Makara Sankranti is celebrated since the times of the Aryans. Even today people celebrate it in different parts of India in different ways and by different names.

In North Indian states of Punjab and Haryana, it is celebrated as Lohri festival; as Magha Saaji in Himachal Pradesh. Uttar Pradesh celebrates it as the Khichdi festival; Bihar as Til Sankranti. It is called Pongal in Tamil Nadu, Suggi in Karnataka; while in Assam, it is celebrated as Magh Bihu and Bhogal Bihu. Besides India, many other Asian countries like Bangladesh, Cambodia, Laos, Myanmar, Nepal, Sri Lanka and Thailand also celebrate Makara Sankranti in different forms.

The lord of Makara (Capricorn) is Shanidev (Saturn). Suryadev (Sun) is the father of Saturn. Yet they are bitter adversaries of each other. However, on Makara Sankranti day, Sun God forgets his anger and animosity and visits his son – Saturn’s house. Hence the practice of distributing and eating ‘Til Gud’ – an Indian sweet made of sesame (representing Shani) and jaggery (representing Surya) started – representing joyful and sweet bonding of adversaries.

Sesame seeds play a very significant role in the celebration of Makara Sankranti due to their association with Saturn (Shani). For the same reasons, people purchase, wear and donate black clothes (which are otherwise considered inauspicious) on this day.

We can also find evidence of the auspiciousness and significance of this festival in an incident of the epic story, Mahabharata. The grand old Bhishma Pitamah was lying fatally wounded on the battlefield. He had the boon of ‘Ichha Mrityu’ i.e. he could choose when to leave this mortal body. He waited for 58 days lying on a bed of arrows so that he could die on the auspicious day of when the Uttarayana began which is MAKARA SANKRANTI DAY. It is a belief that those who die during Uttarayana attain nirvana (redemption).

Significance of donation during Makara Sankranti:

Rituals and customs of celebrating Makara Sankranti may vary from region to region. But the common feature underlining celebrations everywhere is the importance of Japa-Tapa-Snana-Dana-Tarpan (Chanting-Meditation-Holy Bath-Donations-Offerings to the deceased ancestors).

The Shastras mention that the Gods wake up on this day after 6 months of sleep. (1 day of Gods = 6 terrestrial months). Hence it’s the time for new auspicious beginnings and celebrations. Hence people make offerings to Sun – the life-giver. It is a strong belief that whatever is donated on this day comes back multifold. The logic behind this is to let everyone partake in prosperity and abundance.

Donations not only help one to earn blessings but also help to mitigate the adverse effects of the malefic planets in the person’s Kundli (Birth Chart). Anyone who is facing problems due to adverse Sun or Saturn, who is undergoing Sade Sati or Shani Dhaiyya or Panouti or the Dasha of Sun/Saturn, Pitra Dosha, Kaal Sarpa Dosha shall benefit by donating the related things on this day.

Childless couples can benefit by fasting on this day and donating til (sesame seeds) and til products after offering water to the Sun.

Those facing serious or multiple problems in their lives – be it mental, physical or financial- can do Tula daan on this day i.e. donate articles equivalent to their body weight.

Cleansing oneself before making offerings is also obligatory.  Hence people take a dip in the holy waters of Ganga, Yamuna or whichever local river is there in the vicinity. Those who do not have access to rivers mix sesame seeds and Gangajal to their bathing water.

It is best to make the offerings to a needy person/s. Gold, ghee (Clarified butter), sesame seeds, cow, cow/ox, blankets, clothes, jaggery are the main items to donate on this day. Another very important thing donated and distributed is ‘Khichdi’ – a mixture of rice, lentils and vegetables.

Note: Til i.e. sesame seeds and Jaggery can be and should be donated by all the signs.